You are here: Home / Stories / Our Story

The story of where the pancakes are is really the story of why good simple food matters. There really is no other food that so purely nourishes people, physically and emotionally – yet is so underrated.

Growing up in Holland – with a mother who was a fishmonger – fresh and healthy eating was always centre-stage with weekly deliveries of still-live fish making its way onto our plates almost daily. The soaring highlight of my childhood was our regular family outing to a local pancake restaurant – a dark, buzzing place in a small provincial town where the passionate owner had multiple pans going at the same time, baking large steaming hot Dutch pancakes with aged gouda and bacon or apples and raisins. People from miles away would travel here for a simple honest meal with a cold glass of lager – it is still around and as busy as ever.

Fast forward to Paris where I spent a year or so to make sense of the French language (which I had studied arduously for years without much vocal/verbal result), and strapped for cash, there were always a few pre-Euro Francs to spend on baguettes and crepes. It will be no surprise that the following eight years spent in California were marked by my discovery of gorgeous puffy fluffy pancakes and maple syrup – in hindsight they probably weren’t the best, but they were great for my soul: knackered after long days and nights of work, there was nothing more reassuring than the quiet booth, the plate stacked with warming pancakes and the waitress refilling my mug of pre-Starbucks coffee.

California in the nineties was already in the grip of a food revolution: nutrition and organic took centre-stage; farmers markets “came to town”; flavours from Lebanese, Japanese, modern Italian and Korean food cultures started to cross over. 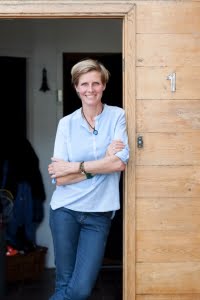 After meeting my husband, I made London my permanent home and swapped my first career for motherhood and new adventures. At the school gates, I was miffed to see how parents segmented into expected alliances, bound by social status or nationality whilst our children experienced no borders between them. Cooking clubs seemed a reasonable solution – for children and adults. I learned and taught how to make jams; samosas; cannelloni; Christmas dinner; and made bonds that changed my relationships throughout our children’s primary school years. That mix of connecting people through food fired a spark.

After visiting a fading pancake restaurant on the Kings Road, one that really had very little going for it but was full of people even on a rainy Tuesday in March, I made a decision: food & people would be my professional future – and the obvious choice was a pancake empire! The rest is history.

The more I talked about it with just about anyone, the more I fell in love with it. It rekindled a deep appreciation for the essence of good food. It proved that everyone has a pancake memory, whatever age, nationality, or culinary inclination. Whilst the nineties in LA were marked by the nutritional revolution, in the noughties I found myself in the midst of another phenomenon – food allergies. Not one family I knew was exempt from being affected somehow.

If we were to regenerate pancakes, we had to make sure our menu would accommodate for this radical change in dietary needs. I began to experiment with different flours: swapping, substituting, mixing. I made and tested every pancake variety. At school fairs, at festivals, at home – then came the pop-ups.

The experiments were sometimes too much of a challenge, especially when my son and daughter had invited a small posse of friends over for their mum’s “best ever” pancakes and there was no Nutella in sight! However, when my stand at the local school fair accumulated a meandering queue around the block till all the batter was depleted 90 minutes after the fair had closed, I knew I was onto something special. London, with it’s melting pot of cultures that blend, progress and create modernity, turned out to be the ultimate place for me to re-invent the universally loved pancake.

Keep me updated about recipes, news, tips and offers from where the pancakes are.

Your personal data will be processed by where the pancakes are Ltd to send you emails with updates regarding products and services in accordance with our Privacy Policy.

where the pancakes are
Arch 35a,
85a Southwark Bridge Road,
London, SE1 0NQ